Given Indonesia’s locational advantages– rich natural resources and a climate conducive to many forms of agriculture -, these clusters offer growing opportunities for investment in manufacturing, agriculture, marine, infrastructure, and tourism industries. Moreover, Indonesia has large forests areas, deposits of coal, tin, bauxite, copper, nickel, and other minerals. The country also boasts a significant oil and gas sector and is one of the leading suppliers of natural rubber.

To facilitate investment in these zones, the government of Indonesia has instituted a number of incentives targeting investors setting up within SEZs and industrial parks. 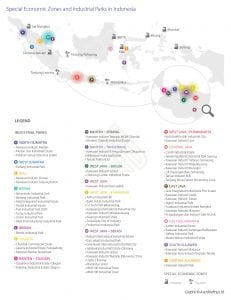 The SEZs in Indonesia are open to foreign investment and offer investors access to preferential regulatory infrastructure and taxation in an attempt to channel investment into specific locations. Some of the industrial SEZs are discussed below.

The main industries set up in Sei Mangkei include palm oil and rubber industry. Besides, there are ancillary industries established in the region such as logistic, energy, electronics, and tourism. The main products manufactured here are fatty acid, fatty alcohol, surfactant, biodiesel, and biogas.

The SEZ is a downstream industrial center of the resource-based sectors such as seed rubber, palm oil, and coal and has a good potential of water supply from the nearby Banyuasin and Telang River. It is strategically located near the Indonesian archipelago Lanes (ALKI 1) and the Strait of Malacca.

The MBTK SEZ is located in East Kutai Regency, East Kalimantan province and consists of industrial zones, logistics, and export processing. The region is rich in natural resources such as oil palm, oil, gas, minerals, and coal. The SEZ can serve as the processing center of palm oil and its derivatives, industrial minerals, gas, coal, tourism.

Palu provides a strategic location for the development of natural resources- based industries. These include agriculture and plantations of rubber, cocoa, rattan, seagrass, as well as the mining of nickel, gold, iron ore, and lead.

Mandalika has the status of Special Economic Zone (SEZ) for the agricultural and ecotourism industries which was newly launched by the Indonesian government in 2014. It has benefits for investors in terms of fiscal and non-fiscal incentives. With a total area of 1250 ha, it offers natural beauty, panoramic views, and other tourist attractions.

Located in Sulawesi Utara District, SEZ Bitung is built on an area of 534 Ha and is strategically located with international access to East Asia and the Pacific.  The key industries include fisheries, oil industry, and other logistical support.

The Morotai Island has a famous World War II airport – Leo Wattimena Airport that has a huge runway capacity. The airport has a potential to serve as supporting infrastructure in the SEZ and increase East Indonesia’s access to the international market. The island is nestled between Asia and Australia and has short flights from Singapore and Taipei.

Located in Mayamuk District, KEK Sorong is built on an area of 523.7 Ha on the international trade trajectory of the Asia Pacific and Australia.

The SEZ provides several geo-economic advantages, namely potential in the fishery and marine transportation sectors. The location is also very strategic for the development of the logistics industry, agro-industry, mining, and shipyard industry.

To avail tax facilities, the investing company must be registered by the relevant government authority  to be a ‘business entity’ that develops or manages a SEZ; have a new investment with new investment plan; and must be involved in chain of ‘main’ activities – as determined by the National Council for Special Economic Zones, in the SEZs. Some of the available tax facilities include the following.

A. Tax Holiday for Primary Industry

B. Tax allowance for other industries

D. Customs exemption is available on

Goods exiting from the SEZs to the domestic market, however, are subject to customs duty, except those that fulfill the minimum local content requirement of 40 percent.

Furthermore, foreign investors investing in the SEZs are allowed to have the building right on land (Hak Guna Bangunan), which is extendable up to 80 years; own property in the SEZs; and those who own property have the option to apply for the permanent stay permit in Indonesia.

Industrial parks offer a cost-effective way to increase access to basic infrastructure and ensure that production can be carried out in an efficient and effective manner.

Located throughout the country, these investment options have become more targeted in recent years, often specializing in select industries and providing investors with the resources, utilities, and connections to transport networks required to optimize production chains.

The applicable tax facilities in industrial parks depend on the classification of the industrial development area (IDA); these are –  potential IDA, developing IDA, and advance IDA.

Taxpayers in industrial parks are entitled to the following tax incentives

The slow development of industrial land combined with heightened demand has increased the cost of property in Indonesia’s special economic zones in regards to the industrial parks. Furthermore, most industrial zones in Indonesia are still at the primary stage of development and lack adequate infrastructure. While poor road and railway connectivity may increase the transportation costs for manufacturers in some regions, inconsistent power and water supply can restrict factories’ utilization rate – raising the overall cost of manufacturing in the special zones.

Aside from costs, it is essential that investors consider other aspects of the special zones– such as distance from a seaport, quality of infrastructure, availability of labor – carefully, when assessing their investment potential in the country.