THE FUTURE OF INDONESIAN ECO-TOURISM

The Centrepiece of Lombok Development

The Mandalika Project covers 1,175 hectares of coastal land in Kuta, South Lombok, and will, when complete, be home to more than 16,000 hotel rooms, a waterpark, a 27-hole golf course, 1,500 villas, and an international-standard motor-racing circuit. The estimated cost of the venture is believed to exceed US$3 billion.

As well as seeking to attract more tourists in general to the island, the project also promises to be an ecotourism hotspot. Solar power, a water desalination plant, and a promise to retain 51 percent of the area as open green space are all part of the plan to protect the region’s natural beauty and enhance local culture.

Mandalika is not only the largest project of its kind in South East Asia, but also the centrepiece of the Government’s plan to develop a tourism model in Lombok that is akin to Bali.

What sets the Mandalika Project apart is that it is a development trying to avoid some of the traps of previous luxury developments in Indonesia. With at least 51% of its 1,175 hectares designated as ‘green space’ from the outset, the intention of developers is to create something that works in tandem with nature by becoming a template for sustainable development.

By incorporating environmentally friendly technologies such as solar farms and SWRO plants, land power is harnessed, and tech-savvy greenhouses will be used to make the resort more self-supporting by enabling it to to grow food efficiently and organically for its restaurants.

As if this wasn’t enough, the resort will maximise panoramic views, house an electric light rail train, a cable car, theme park, eco-park, water-park and mangrove park – green aspects of which will enhance the Mandalika as a prime new location for eco-tourism.

The opening of Lombok International Airport in 2011 led to a 200% average increase in visitors year-on-year. The government's hope is Kuta Mandalika will become one of Southeast Asia's top luxury destinations.

Electricity is supplied by PLN and KMPL with a capacity of 30MW and 50MW respectively. Kuta Mandalika will increase power with a 15MW-capacity solar plant.

The development of four kilometres of access roads leading from the airport to Kuta Mandalika and Tanjung Aan beach is already finished, reducing travel times substantially.

Construction of the Pullman Hotel is already under way and Club Med, Royal Tulip, Paramount Hotels and X2 resorts all expect their projects to be complete in the near future.

Marina Del Rey will be the first fully functional 200-berth superyacht facility in Indonesia. Located on the southwest corner of Lombok, the facility will offer a secure haven all year round for all types of yachts and boats.

Once finished, the Mandalika International Street Circuit will host an Indonesian round of the MotoGP World Championship for 10 years at least, as well as various other major motorsports events. 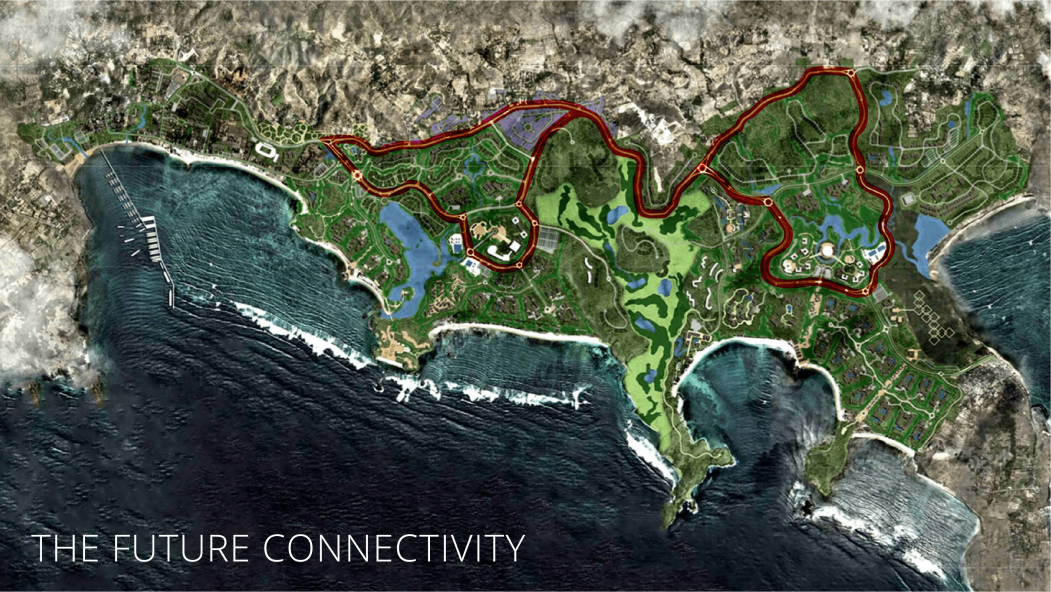 To support the vision of the Kuta Mandalika development, an internal transportation system has been designed in synergy with the concept. The electric train will provide an eco-friendly transportation solution throughout the entire development.

Embracing the natural setting, there will be a cable car for public recreational transport. Connecting the hills at the north of the complex, it will stretch 4km and allow visitors to enjoy 360° views of Mandalika.

Find out more about the MANDALIKA project

The Return of Elite Motorsports to Indonesia

Almost a quarter of a century after the country hosted its last MotoGP race, Indonesia will soon return to the elite motor-racing calendar. The inclusion of the country on the MotoGP calendar will represent a giant leap for Lombok. Already attracting hundreds of investors each year, the hope is major international events – and Formula One has not been ruled out for the future – can turn the island into a year-round sporting destination.

ITDC signed a deal with Dorna Sports for MotoGP hosting rights in 2018, marking a historic breakthrough both for Lombok and the sport. With a population close to 270 million, the country famously boasts the largest motor-racing fanbase in the world, yet has hosted a race just twice in history and been absent from the racing calendar since 1997.