Poverty in Indonesia declined to the lowest level ever in March 2018 (Indonesia’s Central Statistics Agency, or BPS, releases poverty figures twice per year, covering the months March and September). Based on the latest data, Indonesia’s relative poverty figure fell to 9.82 percent of the total population. Thus, 25.95 million Indonesians are now categorized as poor.

BPS Head Suhariyanto said the latest poverty statistics are the best in Indonesian history because for the first time ever the nation’s relative poverty rate touched a single-digit figure. However, he added that there is no time for complacency because there remain 25.95 million people who live below the national poverty line. This is a large number.

Moreover, there are dozens of millions Indonesians who live just above the poverty line, implying that a relatively minor peak in inflation could push these people (back) into full-blown poverty. Therefore, there remains plenty of homework to be completed by the government. However, as we noted several times before, it has become increasingly difficult for the government to lift this remaining group out of poverty (especially now that economic growth has been stagnant around the 5 percent level).

From 1998 – when the poverty rate nearly touched 25 percent – to 2012 Indonesia’s poverty numbers fell markedly because most of these people had been living slightly below the poverty line (and therefore it required fewer efforts to lift them out of poverty). After 2012 poverty continued to slide in Indonesia but at a slower level because it is now the bottom base of Indonesia’s poor people who need to be alleviated. This is more complicated and therefore results in slowing rates of poverty reduction.

There were two factors that blocked a faster rate of poverty reduction in March 2018 according to Suhariyanto: (1) rising prices of rice and (2) very modest growth in Farmers’ Terms of Trade (FTT). Rice is the key staple crop for Indonesians, hence a significant portion of poor peoples’ disposable income goes to the purchase of rice. In times of rising rice prices, this group will feel growing financial pressures. Therefore, it is important for the government to guard its rice social assistance program (called Rastra). Earlier there had been reports about sluggish distribution of rice under this Rastra program.

The FTT is the ratio of prices received by local farmers to the price paid by farmers. This ratio simply reflects the purchasing power of farmers. According to the latest data, FTT rose by a very modest 0.37 percent month-on-month (m/m) to 101.99 in May 2018.

A more thorough analysis of Indonesia’s latest poverty data will be available in the July 2018 edition of Indonesia Investments’ research report. 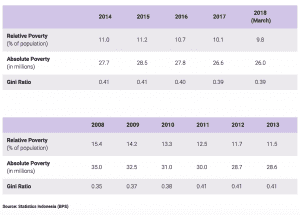