The Indonesian tourism sector: A bright future and opportunities for Australia

The Indonesian tourism sector: A bright future and opportunities for Australia

Tourism in Indonesia has more than doubled over the past decade, with some media reports claiming that 2017 saw over fifteen million tourists visit the archipelago state. The tourism industry has flourished and become a major driver of the economy and a central feature of the government’s economic growth strategy. To facilitate further growth, the Indonesian Government is hoping to replicate the success of Bali as a tourist destination in a number of other locations spread across Indonesia.

The tourism sector is a major economic driver for Indonesia. In 2016, foreign exchange earnings from tourism totalled $16.3 billion. When indirect and induced incomes from travel and tourism are included (such as investment spending and spending by employees), that figure increases to $72.4 billion, or approximately 6.2 per cent of GDP in 2016. This level ranks Indonesia’s tourism industry as the twenty-second largest in the world, according to the World Travel & Tourism Council. It is larger than the average tourism industry in South-East Asia, but smaller than those of Australia, Thailand and the Philippines. Strong growth is expected for the Indonesian industry, with indirect and induced incomes predicted to reach $141.3 billion annually by 2027, according to the World Travel & Tourism Council report. 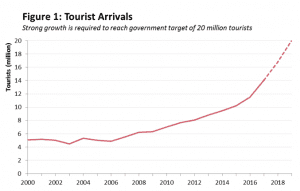 The Indonesian Government, however, may be too optimistic in its growth projections. In 2016, Tourism Minister Arief Yahya claimed that he wishes to double the number of international visitors coming to Indonesia to total over twenty million by 2019. Yahya has made similar ambitious claims before. In 2014, he told Reuters that he wished to double the number of Chinese visitors by 2016, but, in reality, the number grew by only 45.6%; although that is still an impressive figure.

His most recent claim also appears too ambitious. Given that 2017 saw 14 million foreign arrivals, the minimum growth rate required to reach 20 million tourists by 2019 is 19.4% per annum. As seen in Figure 1, that is a difficult target, given that the growth rate for foreign arrivals over the past five years has averaged 11.9%. Consistent growth of around 20 per cent for three years straight would be unprecedented in Indonesian history and is a rare occurrence for other tourism industries throughout South-East Asia. So, while not impossible, achieving such a high target does seem unlikely.

There are also obstacles facing Indonesia’s tourism industry, namely, poor infrastructure and the lack of investment required to fund the necessary infrastructure projects. From 2015 to 2019, the funds required to meet Indonesia’s overall infrastructure needs amount to approximately $450 to $520 billion. Looking at projected government spending in contrast to investment and other contributions, it is likely that the government will fall short of the required funds for infrastructure by at least $120 billion. To fill that funding gap, the Indonesian Government has made a number of bilateral agreements with countries such as China and Japan and sought loans from the World Bank and the Asia Infrastructure Investment Bank. According to PricewaterhouseCoopers, however, many of those agreements are fraught with challenges, due to being politically, rather than commercially, driven. As a result, funds tend to be slowly dispensed and often not fully utilised.

That has left tourist-related infrastructure in a poor position. According to the World Economic Forum (WEF) in its 2017 Travel and Tourism Competitiveness Report, tourist service infrastructure was the worst performing area in its analysis of the Indonesian tourism industry. With a score of 3.1 out of seven, Indonesia’s tourist service infrastructure is worse than that of Kenya and only slightly better than Venezuela. Ground and port transport infrastructure is also ranked poorly in the report. While the Indonesian Government has recognised the poor state of infrastructure, in remedying that problem it must consider the potential environmental impact of developing new hotels, roads or airports. That must be done not only for the sake of general environmental concerns, such as native wildlife, but also to preserve the forests and beaches as tourist attractions. In the WEF Report, Indonesia ranked poorly in environmental sustainability, but highly in natural resources. Maintaining those natural resources should be a vital component of Indonesia’s tourism industry.

PrevPreviousIndonesia is a country with the ninth-fastest growing tourism in the world, the third in Asia, and the fastest in ASEAN
NextIndonesia promotes the archipelago’s top-destinations at the UK World Travel Market (WTM) LondonNext