Joko Widodo, Indonesia’s seventh president, unveiled his first term in 2014 with an ambitious infrastructure development plan for both land and sea. Five years on, how should one assess the results of his administration’s economic policy?

In April 2019, Indonesian President Joko “Jokowi” Widodo cruised to a comfortable re-election victory against his challenger, Prabowo Subianto. Despite a contentious campaign featuring the use of divisive identity politics and attempts to paint Jokowi as an agent of foreign capital, the president’s broadly popular policies in his first term (2014-2019) helped to secure the win.

Jokowi’s first term was defined by a state-led development drive narrowly focused on building up the country’s lagging infrastructure, a policy often referred to as Jokowinomics. At the start of his term, he eliminated billions of dollars in public subsidies for the oil and gas industry and redirected those funds toward major infrastructure projects such as toll roads, housing developments and airports.

Jokowinomics took the form of direct government outlays as well as capital injections into a number of state-owned companies focused on infrastructure such as airport operators Angkasa Pura I and II. The plan also called for significantly ramping up disbursements to the Dana Desa or Village Fund, a programme where local village heads receive grants to invest in priority projects.

Other incentives include the Kartu Indonesia Sehat or Indonesian Health Card scheme, a flagship of the nationwide health insurance plan that subsidises medical expenses for all employees.

Despite increased opportunities for graft and waste, these expansionary fiscal measures have had a stimulating effect on the economy, helping buoy the growth of fixed capital amid weakened exports and lower commodity prices. During Jokowi’s first five years in office, GDP growth had been stable at 5%, which is strong by global standards but considered disappointing for Indonesia in some quarters, especially as the government had initially promised 7%.

Yet when Jokowi took office, GDP growth had been declining for several years, and it was likely that his expansionary policies arrested that decline and stabilised it at 5%.

The concrete impact of Jokowinomics has been striking. Jakarta inaugurated its first MRT earlier this year which was brought to completion after roughly three decades of delays. The over-capacity of Soekarno Hatta International Airport has also received much-needed upgrades, with the addition of a new terminal, an express train linking the airport to the city centre and a Skytrain connection between terminals.

Beyond Jakarta, the Trans Java Toll Road, long-stalled due to battles over land acquisition, is now complete. Huge tracts of new toll roads are operational or under construction in Sumatra, Kalimantan and elsewhere. The Trans-Kalimantan Highway Southern Route which was inaugurated in 2017, for example, extends connectivity to the Malaysian state of Sarawak.

In fact, from 2015 to 2018, Jokowi’s government completed 718 kilometres of new toll roads. By comparison, in ten years under his predecessor Susilo Bambang Yudhoyono, only 229 kilometres were constructed.

In the energy sector, 7 mega-power projects of 1,000 MW or greater, with a total value of US$17 billion, have reached financial close and are under construction in Java and Sumatra. A new international airport valued at around $800 million and with a capacity of 15 million passengers has opened in Yogyakarta, and the country’s first high-speed rail link connecting Jakarta and Bandung is also under construction.

These and other big-ticket projects will ultimately lower transaction costs and boost Indonesia’s competitiveness while injecting billions of dollars into the economy. 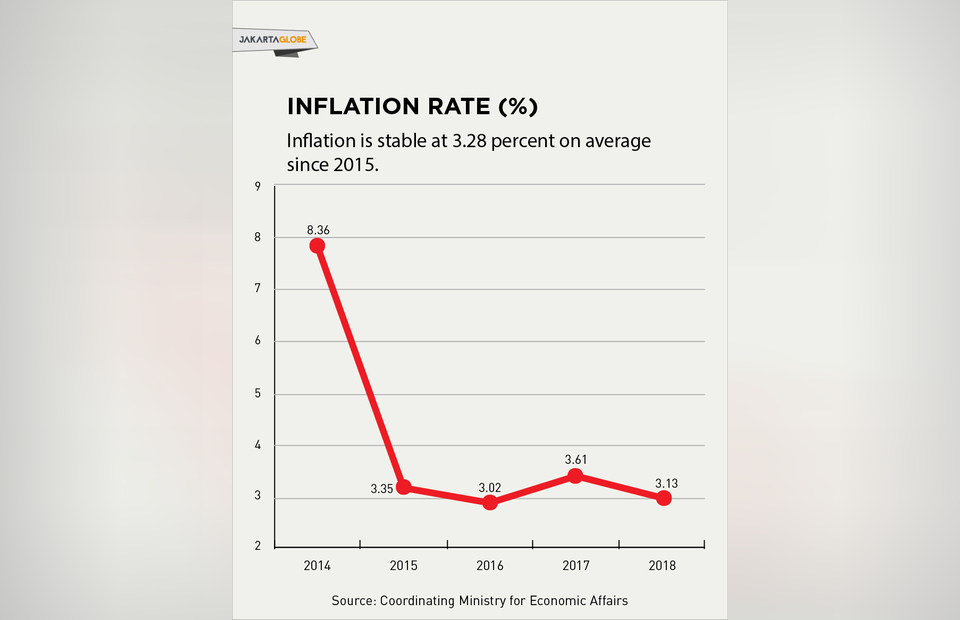 Monetary policy has likewise been shrewdly managed in Jokowi’s first term. His appointment of technocratic experts with solid policy credentials to important posts proved key as volatility in global capital markets placed pressure on the rupiah. Two notable ones were former executive director of the World Bank and IMF Sri Mulyani as Minister of Finance and another former IMF executive director Perry Warjiyo as Governor of Bank Indonesia.

Indonesia runs one of the world’s larger current account deficits. This is not, as is often presumed, the result of a trade imbalance. It is instead a result of large inflows of Foreign Direct Investments (FDIs) and investment in Indonesian stocks and bonds.

As the Global Financial Crisis depressed bond yields in developed economies, investors began channelling money into emerging markets where yields were higher. Indonesia has thus been a recipient of large investment inflows that have underwritten much of Jokowi’s infrastructure spending.

The question many, including Jokowi’s challenger, Prabowo Subianto, have raised is whether these investment inflows and the debt they represent are sustainable in the long-run. After all, excessive debt cratered the Indonesian economy in the 1960s and 1990s.

But there are important differences in Indonesia’s recent debt strategy. The government is legally prohibited from borrowing more than 3% of GDP to finance a deficit in any given year. Total external debt in 2018 was a little over $350 billion, or roughly 35% of GDP.

This may seem large, but is actually a moderate external debt load for an emerging market and unlikely to pose a serious systemic threat in the short-term, particularly while Bank Indonesia has ample foreign reserves.

While this may insulate the government from insolvency, it also constrains its ability to finance infrastructure development on the scale Jokowi wants, which requires tens of billions of dollars. To get around this, Jokowi has used state-owned companies as the principal agents of infrastructure development. They can issue bonds and take on debt that does not count against the 3% cap, and this vastly expands the government’s financial options. 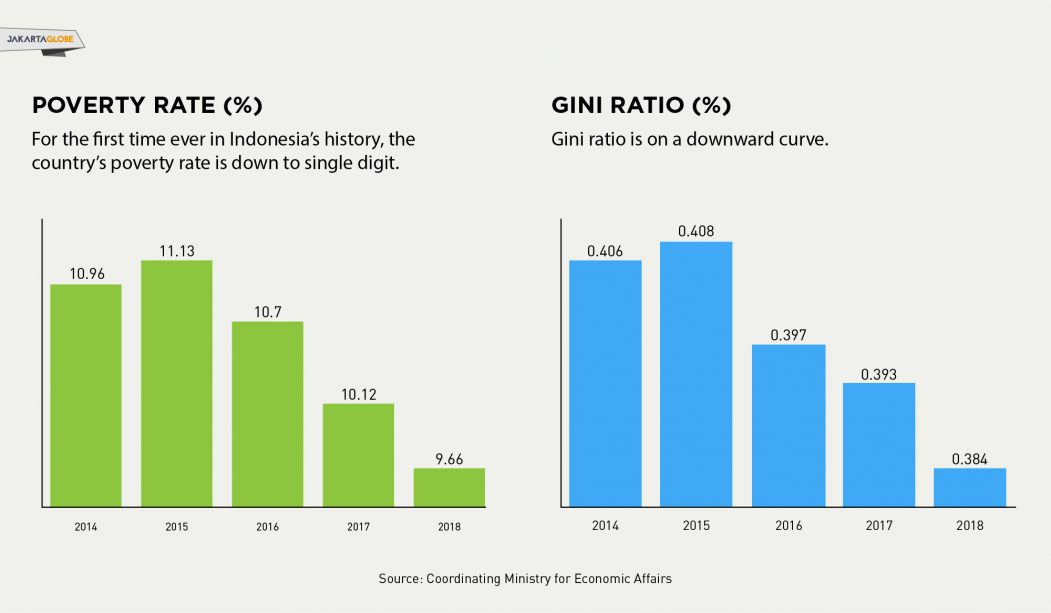 This, of course, raises questions about the soundness of the balance sheets, and certain state-owned enterprises (SOEs), such as the government-owned electricity utility PLN, have questionable financial models. Nonetheless, other SOEs in the toll road, airport, construction and banking sectors, among others, are raising capital far more sustainably and with sounder financial models.

For instance, the vast majority of recent SOE bonds issued both internationally and domestically have also been denominated in rupiah rather than foreign currency. This insulates them from slides in the currency and shifts the risk of depreciation onto the bondholder.

Similarly, much of the recent bank debt is being sourced from domestic banks and is denominated in rupiah. This suggests that the debt hysteria may have been overblown. Moreover, debt is being channelled into productive purposes such as building infrastructure that will boost output.

Monetary policy has prevented capital flight and kept investment inflows healthy despite volatility in global capital markets and a steady depreciation in the rupiah. Despite attempts to leverage identity politics and invoke divisive rhetoric, these broadly popular and relatively effective economic policies helped Jokowi win a second term in office.

It remains to be seen, if having strengthened his position, Jokowi will rectify the deficits on the political side of the equation. Some Indonesia watchers have identified these to include the growing marginalisation of the political opposition and the shrinking space for democratic choice. Economics aside, Jokowi’s real battles arguably lie mainly in politics rather than economic policies.

PrevPreviousWhy Indonesian beach paradise Mandalika in Lombok is dubbed the ‘new Bali’
NextLombok the New Bali: How Indonesia will make it happenNext