– Bank Indonesia (BI) views Indonesia’s debt rating from Fitch Ratings to BBB, with a stable outlook, as an acknowledgement of the external resilience of the Indonesian economy amid global uncertainty.

Fitch affirmed Indonesia’s debt rating for the “sovereign credit rating” at the BBB level of a stable prospect (Investment Grade) as of March 14, 2019.

“It shows the belief of the debt rating agency on the Indonesian economy and the resilience of Indonesia’s external sector amid uncertain global economic conditions,” BI Governor Perry Warjiyo said in a written statement in Jakarta on Thursday.

Going forward, the Central Bank will continue to consistently pursue the policy mix to strengthen external stability and encourage the momentum of economic growth.

“For this reason, coordination with the government and the related authorities will also continue to be strengthened,” Warjiyo noted.

Several factors that support this decision are the prospect of good economic growth and relatively low government debt burden amid the challenges of dependence on external funding sources and low government revenues, Warjiyo stated.

He sees an improvement in the prospect of Indonesia’s economic growth compared to other countries as well as countries with similar economic capacity (peers).

Domestic demand is expected to remain good amid limited export performance due to slowing global demand. Consumption and investment remain the main sources of growth along with the existence of bonus salaries of civil servants, increased social assistance funds, and the implementation of various infrastructure projects, especially by state-owned enterprises.

From the external, “sovereign credit” side, Indonesia is believed to remain safe and adequate in facing the possibility of significant exchange rate movements. This could happen if the United States monetary authorities again tighten monetary policy at the end of the year. 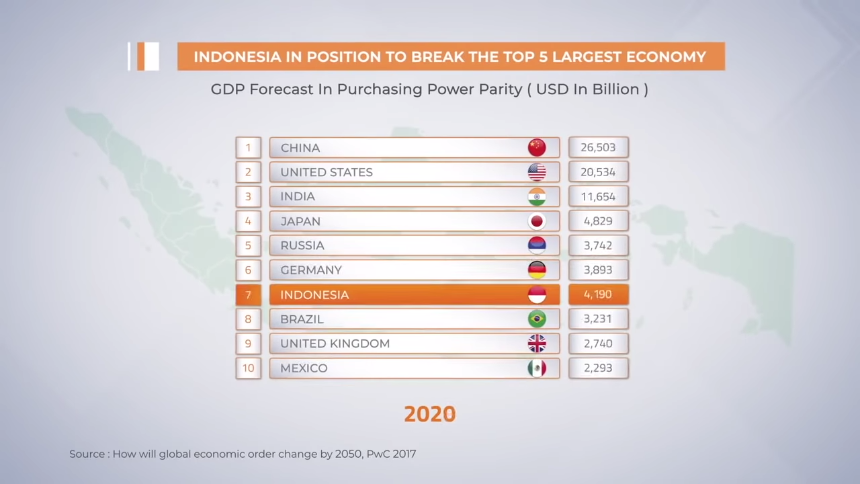 He added that the low government debt burden compared to other countries was a temporary pressure-reducing factor.

The Consumer Price Index inflation is expected to reach 3.4 percent in 2019, and policy interest rates are not expected to change.

This is in line with BI’s goal of strengthening external stability by controlling the current account deficit and maintaining the attractiveness of Indonesia’s financial assets. Warjiyo remarked that BI would undertake the easing of macroprudential policies in the near future.

On the fiscal side, reducing fiscal deficits ahead of the 2019 election shows Indonesia’s conservative attitude in the field of fiscal policy.

“The fiscal deficit was recorded at 1.8 percent of GDP in 2018 or lower than the fiscal deficit in 2017, which reached 2.3 percent, largely supported by high revenue growth and efforts to improve tax revenues,” he added.

PROJECTIONS ON THE INDONESIAN ECONOMY

Indonesia’s economy is on the rise, helping the country take its rightful position as a major destination for foreign direct investment (FDI). Indonesia is entering a “sweet spot” as a convergence of its young, working population with that of relatively stable inflation and sustained economic growth which in turn is fuelling overall consumer spending. Finally, the country’s resilience during the global financial crisis illustrates the merits of its immense population and economic self-reliance, demonstrating how these factors buck the trend of most other G20 economies.