A delegation from Dorna, including series chief Carmelo Ezpeleta, visited the island last October, and a formal announcement of the plans eventually arrived.

The contract for the race venue has been awarded to Vinci Construction, which has been allotted land of 131 hectares surrounding Mandalika, a business area located in the southern part of Lombok island.

Vinci will also serve as the chief investor of the race, with the French company’s contribution expected in the region of 900 million euros.

Should the track be put together in time, it would mean MotoGP will finally secure a place in one of the world’s largest two-wheeler markets.

“It is possible that there is an urban circuit in MotoGP,” he said. “There is a solid project in a warm city. In theory, a straight of the track will be urban and the paddock will be covered, integrated into an exhibition centre.

“Thus, during the grand MotoGP Prix it will be used for the race and the rest of the year for many other things.”

Finland and Mexico have been vying a spot on the MotoGP calendar for a while but were not included in the 2019 schedule, keeping the race count at 19.

“Until 2021, we will certainly not make more than 20 grand prix a year. From there, we’ll see,” Ezpeleta told Motorsport.com.

“We have many demands for circuits that want to celebrate a race. Those who have contracts will respect them, but from there they will have to negotiate.”

“With all the tourist spending in Indonesia during the five-day [MotoGP] event, the direct profits could reach IDR1 trillion,” he said in a meeting between the government, circuit manager, and strategic partner at the office of the Presidential Chief of Staff on Wednesday (04/18).

Meanwhile, the indirect impact can double the profit figure above, as the MotoGP series will be broadcasted live through 60 television stations to 200 countries in the world. The indirect profit is around IDR2 trillion.

Indonesia Minister of Public Works and People’s Housing Basoeki Hadimoeljono also expressed his support for the construction of infrastructure to support the circuit site.

“This is purely a private sector project, but we are ready to support in terms of infrastructure, such as roads, parking lots, and so on across the entire Lombok Island,” Basoeki said.

The meeting at the President’s Chief of Staff office was a follow up on a visit by Indonesia President Joko ‘Jokowi’ Widodo to the Sentul International Circuit on March 6, 2018, and the previous meeting between Presidential Chief of Staff Moeldoko, Tinton and Ananda Mikola on March 19, 2018.

In addition, Ananda Mikola said that MotoGP was a popular automotive sport among all elements of Indonesian society.

On September 28, 1997, Sentul Circuit was the single Indonesia MotoGP circuit that held a championship event. There was Valentino Rossi racing in the 125 cc class for Aprilia, while the 250cc class was won by Max Biaggi from Honda. The podium of prestigious 500 cc was won by the Honda trio Tadayuki Okada (Japan), Mick Doohan (Australia), and Alex Criville (Spain).

“At that time, the Indonesia MotoGP could not be continued due to the economic crisis. It will really be a dream come true if MotoGP can be held again here, “said Tinton.

Watch the full movie trailer of the Lombok MotoGP 2021 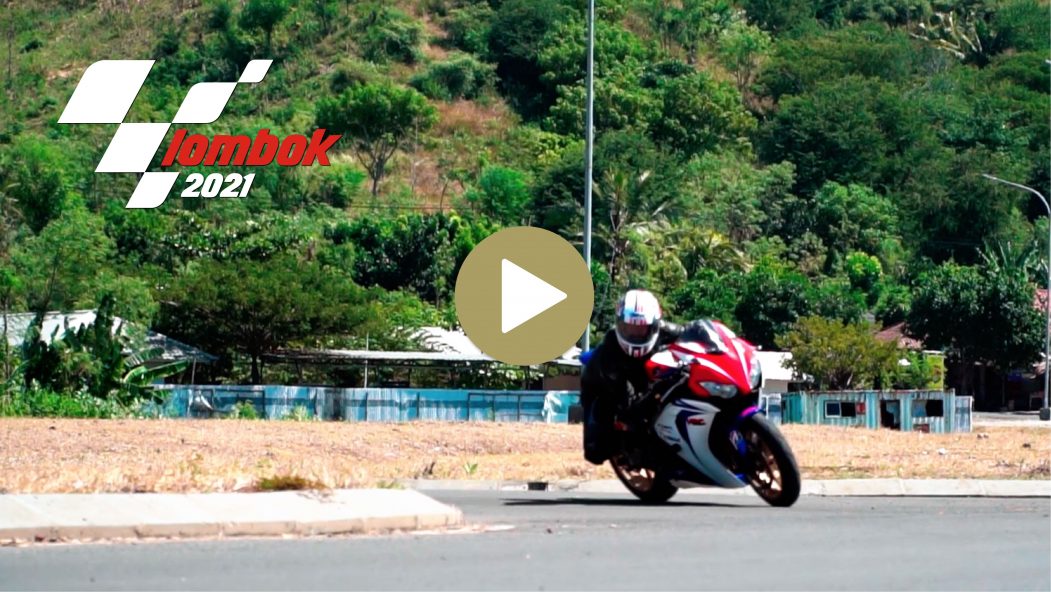 The new Indonesian MotoGP circuit in Lombok round in Lombok 2021

Indonesia will host a world-class motor racing event for the first time after more than two decades as the country has secured a deal with Dorna Sports’ MotoGP for a slot in the 2021 season.

The country had held two consecutive MotoGP stints at the Sentul International Circuit in Bogor, West Java, in 1996 and 1997. Legend Valentino Rossi of Italy won Indonesia’s 125 cc title in 1997.

Indonesia Tourism Development Corporation (ITDC), a state-owned company, sealed the deal with Dorna for the prestigious motorcycle race. The event is to be held on a new circuit in the Mandalika Special Economic Zone on the island of Lombok in West Nusa Tenggara (NTB), which was hit by a devastating series of earthquakes last year.

“We signed a contract in Madrid on Jan. 29 with Dorna, the MotoGP operator, and Mandalika’s street circuit is targeted to have its first race in 2021. Now, we will focus on establishing the venue, infrastructure and facilities,” ITDC president director Abdulbar M. Mansoer told the press on Tuesday.

The deal includes hosting the race as well as developing the circuit.

The construction of the 4.32-kilometre racetrack through beautiful scenery from mountains to pristine beaches is part of the effort to turn Mandalika into a world-class tourist destination.

In developing Mandalika’s street circuit complex, ITDC is collaborating with France’s Vinci Construction Grand Projects, which also acts as the main investor for the project.

The US$1-billion deal with Vinci was signed on Aug. 8 last year and foresees 15 years of development.

Aside from the circuit itself, Vinci plans to build supporting facilities from hotels and a shopping mall to a hospital and apartment buildings on 131 hectares of land within the 1,175-ha special economic zone. The street circuit venue is set to accommodate up to 150,000 spectators.

ITDC construction and operation director Ngurah Wirawan said on Tuesday that the construction of the street circuit and complex would begin in October this year with the development of the foundation and underground utility systems as well as roads.

“We will start the development by constructing and preparing the main road first along with its drainage and all the underground utility system needed. Once the main access road is fully built, Vinci will continue the remaining work by constructing and installing the race track and all of the [MotoGP] racing technology,” said Ngurah.

ITDC aims to finish the development of the road and the drainage and underground utility system as the basic infrastructure in the first half of 2020. Vinci is expected to finish the race track and technology installation on the existing road by the end of 2020.

“The road will be open for public use when there is no racing event,” said Ngurah.

Along with the circuit complex, the general construction of Mandalika will continue with sites including hotels, resorts and various tourist attractions.

A Pullman Hotel and Resorts property, for example, has reached 35 percent of completion as of January. Other accommodation facilities, such as Royal Tulip Resort, Paramount Lombok Resort and Residences as well as Novotel Lombok, are to follow.

“So far, we have fully developed a number of public facilities [in the economic zone], such as the Nurul Bilad Mosque, Bazaar Mandalika, Kuta Beach Park and Parking area. All of those facilities have been completely constructed and are in operation,” said Ngurah.

The Mandalika Special Economic Zone was inaugurated by President Joko “Jokowi” Widodo in October 2017 and is aimed specifically at the tourist industry. Mandalika lies around Kuta Beach some 40 kilometres south-east of the provincial capital, Mataram. The SEZ is expected to differentiate itself particularly from well-known tourist areas like Nusa Dua in Bali, which is popular for its Meeting, Incentives, Conferencing and Exhibitions (MICE) tourism.

To finance the Mandalika SEZ infrastructure development, ITDC has recently secured $248 million in financing from Asian Infrastructure Investment Bank for a 35-year tenor.

Separately, Youth and Sports Ministerial secretary Gatot S. Dewa Broto said on Friday that the ministry fully supported the MotoGP plan. However, he hinted that the ministry was not directly involved in dealing with Dorna.

The idea of bringing back the race to Indonesia with the Sentul circuit as the host had been voiced over the past few years but no deal had been secured.

“Another circuit had almost been [built] at the Gelora Bung Karno sporting complex two years before the 2018 Asian Games, but [that plan] was [cancelled],” Gatot said.

https://www.thejakartapost.com/news/2019/02/23/indonesia-to-host-2021-motogp-race-in-lombok.html
PrevPreviousDigital economy in Indonesia in 2019 | Focal point in the future economic boom’ strategy
NextCanada and Indonesia relationship to strengthen with the last infrastructure project partnershipNext

Download our investment guide to find out how foreigners can purchase property in the fastest growing island tourism economy in southeast Asia!