Indonesia economic management is the most solid among emerging countries

Indonesia economic management is the most solid among emerging countries

Indonesia just delivered a strong – and unexpected – dose of confidence to foreign investors.

The central bank was sufficiently worried about the rupiah’s slide that it raised interest rates for the sixth time this year. Only three of 31 economists surveyed by Bloomberg News had predicted an increase. With the benchmark at 6 percent and a projected inflation rate of 3.2 percent, the rupiah is now offering a real yield of 2.8 percent, among the highest in emerging markets.

Bank Indonesia obviously thinks the economy is strong enough to withstand higher interest rates – and it’s right. Despite the monetary tightening, GDP growth remains above 5 percent and credit expansion is picking up again.

“Twin deficit” is the taboo phrase that has sent investors scurrying this year, but Indonesia has been making progress on that score. The government of Joko Widodo recently shrank its fiscal deficit to 1.85 percent of GDP, from a previous estimate of 2.1 percent. The current account deficit is also narrowing, as the president scales back his infrastructure ambitions, lowering imports of construction materials.

Headwinds persist. Until Indonesia swings to a current account surplus, or the U.S. Federal Reserve stops increasing rates, it remains fragile. The economy is particularly vulnerable to hot money flows, in that 37 percent of the country’s sovereign bonds are owned by foreigners.

Still, there’s good reason to believe that credit growth will continue to accelerate. The nation of 260 million people is low-hanging fruit for Singapore-based private banks and Chinese peer-to-peer lenders: Only half the over-15 population have bank accounts and a mere 2 percent hold credit cards. 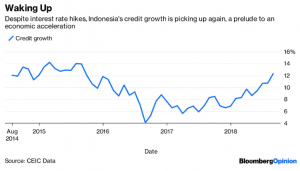 The rupiah has fallen 7.4 percent against the dollar this year but has strengthened from its October low and climbed again after Thursday’s decision. In terms of its economic management, Indonesia looks like the mature kid on the emerging block compared with neighbors such as Malaysia and India.

In Malaysia, Prime Minister Mahathir Mohamad has widened the fiscal deficit by scrapping an important goods and services tax, putting its relative market calm on shaky ground. And in India, a squabble between the government and central bank has thrown into question the independence of monetary policymaking.

Judging by bond portfolio flow data, the global investment community hasn’t abandoned Indonesia, although it was quick to flee Malaysia and Indonesia.

By preemptively raising rates ahead of the Fed, Bank Indonesia has shown it’s eager to keep foreign investors around.