Country risk: Indonesia’s in-built resilience makes it one to watch in 2020

Country risk: Indonesia’s in-built resilience makes it one to watch in 2020

Global trade frictions, domestic political challenges and environmental concerns should all be undermining Indonesia’s outlook. And to a certain extent that is the case, with the country downgraded this year in Euromoney’s country risk survey, if only slightly. Compared with China, Japan, Malaysia, Taiwan and South Korea, though, Indonesia appears to have been treated lightly, shedding less than a point to 60th (out of 100 available). This puts it on a par with Brazil and the Philippines, and barely riskier than Hungary or Croatia in the global risk rankings. There is no immunity to dwindling global demand for exports heaping more pain on the manufacturing sector. This is clear from five straight months of decline for the sector’s purchasing managers’ index compiled by IHS Markit, showing falling output and new orders. Multilateral creditors, such as the Asian Development Bank and the IMF, are nevertheless still confident about GDP growth prospects, eyeing only a minor ripple for 2019 and 2020 – and for the most part private-sector analysts seem to agree. The growth trend is a key positive for investors. 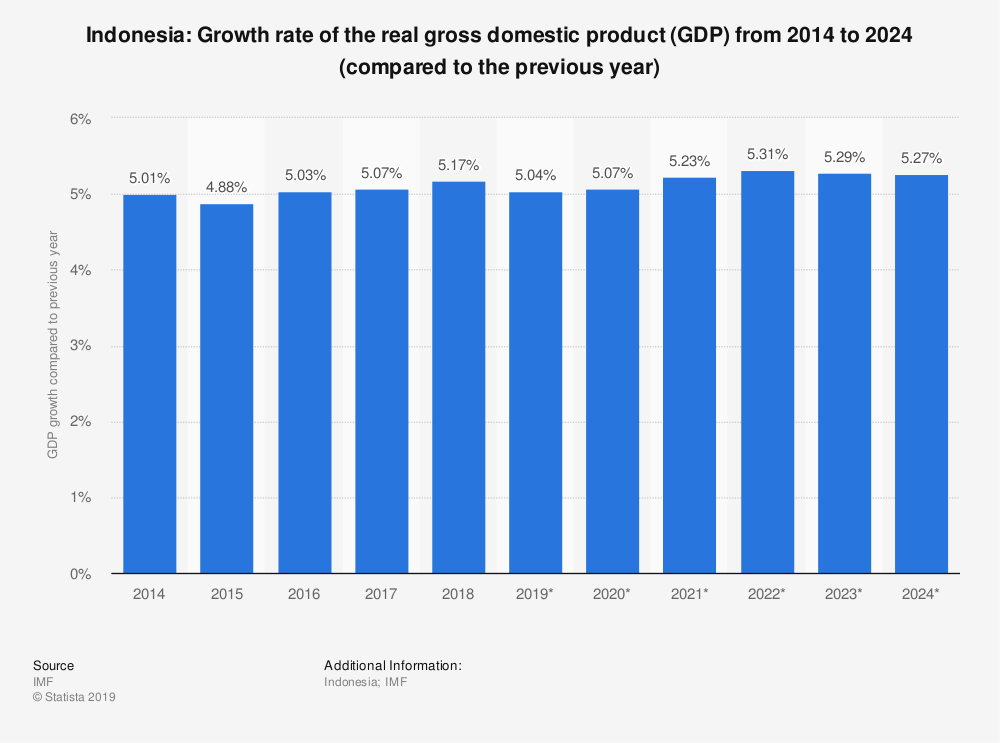 “Over the past years, Indonesia’s growth rate has been remarkably stable around 5%, notwithstanding shocks such as the escalation of the US-China conflict and EM market turmoil in 2018,” says Arjen van Dijkhuizen, a contributor to Euromoney’s survey and senior economist at ABN Amro. His bank is forecasting 5% real-terms growth lasting through to next year, and only marginally down on the 5.2% outturn in 2018. Private consumption This is not so much down to attracting inward investment from shifting supply chains caused by the China-US tariffs war, but strong private consumption, accounting for 60% of GDP. The rapidly rising population of more than 270 million supports consumer spending. So, too, are strong employment growth, contributing to a consistent long-term fall in unemployment rates – now almost 5% – and government programmes providing social support. Worries about the balance-of-payments current account have eased, with the deficit now below 3% of GDP, and fiscal indicators are comfortable with a budget deficit around 2% of GDP and government debt hovering near to 30%. Analysts factor all this into their risk score assessments each quarter.

Many have previously commended monetary authorities, too, for decisive and effective action managing liquidity in the money markets to support the currency and contain inflation pressure. Bank Indonesia, the central bank, increased its policy interest rate by 175 basis points to 6% in 2018, to combat emerging markets (EM) risk aversion. It has since reverted to a loosening of its stance since June, with cuts announced to the policy rate and reserve requirement ratio to support the economy in view of a more stable exchange rate. Under a second Jokowi government, we expect further improvements of the investment climate, infrastructure and education   – Arjen van Dijkhuizen, ABN Amro Yet clearly there are downside risks. Economic growth could soften more than expected from sunken commodity export prices, widening the current account. If international trade frictions intensify, creating more volatility in financial markets, Indonesia would likely be caught up by EM risk aversion, as it has in previous episodes.

Political risks, moreover, could escalate into a much bigger problem for re-elected president Joko Widodo – known as Jokowi – demanding more spending on security and social assistance. In recent months, protests have erupted among students against legislation dampening the authority of the much-respected anti-corruption body and a new criminal code. More widely, an undercurrent of tensions between the secular pro-democracy community and hard-line Islamists tends to spill over, exposing the religious divide. There are threats from regional violence in Papua and environmental risks from forest fires. But attentions will likely remain focused on the country’s strong and stable macro-fiscal fundamentals, and on the government’s efforts to improve the business environment to stimulate investment making domestic demand even stronger. Targeting investors This week, Luhut Pandjaitan, the coordinating minister of maritime and investment affairs, announced that $137 billion-worth of investment projects are expected across various sectors, predominantly oil and petrochemicals, mineral processing, transport and tourism. 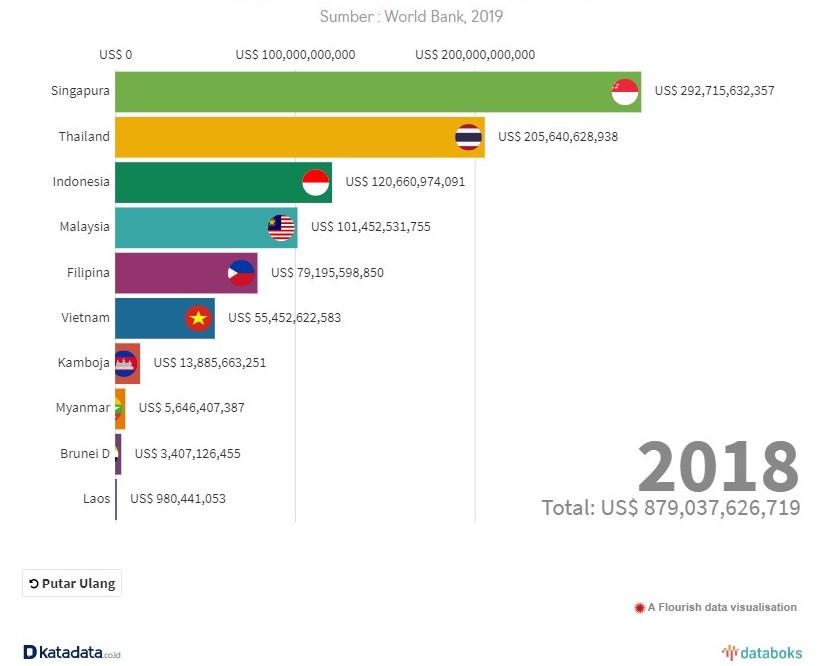 Indonesia ranks 73rd out of 190 countries in the World Bank’s Doing Business 2020 guide, thanks to past reforms. However, Jokowi’s administration is seeking to make further enhancements by sweeping away unnecessary business regulation and substantially increasing shareholdings for foreign owners, while reducing the ‘negative investment list’. A big focus will be on attracting more hi-tech research and gaining a foothold in new and emerging industries. Intense negotiations to attract one of Asia’s larger firms to manufacture lithium batteries is just one example. And the government is now planning to increase fiscal stimulus to support economic growth without endangering the deficit. Risk experts, therefore, still have considerable faith in Indonesia’s longer-term potential. The country has been upgraded more in Euromoney’s risk survey during the past five years than India or the Philippines, contrasting with declines for other Asian countries mentioned above. No one is ignoring the risks. ABN’s Van Dijkhuizen lists them all, but he also takes a positive slant, noting: “The credit-default-swap premium has fallen back to historic lows,” and forecasting “moderate rupiah appreciation versus the US dollar in 2020”. Unresolved structural weaknesses would keep a lid on potential growth, he believes. “[However], under a second Jokowi government, we expect further improvements of the investment climate, infrastructure and education.” That alone is enough to underpin Indonesia’s medium risk potential and is why an improving Euromoney survey score predicted S&P’s decision this year to return Indonesia to investment grade. It also explains why the country is one to watch in the new year.

PrevPreviousHow to Set Up a Representative Office in Indonesia
NextAustralia regains its Bali tourism crown from China after 1.23 MILLION Aussies visit the Indonesian paradise in a yearNext