According to the ASEAN Economic Community (AEC) and Modern Diplomacy, AIIB has approved a USD 248.4 million loan to the Indonesia Tourism Development Corporation in support of the Mandalika Urban and Tourism Infrastructure Project in Lombok.

As its first tourism-related infrastructure investment the AIIB hopes to be able to create a “significant amount of direct, indirect and induced employment in tourism as well as related businesses, boosting Indonesia’s tourism competitiveness and sustainable economic growth.”

Gapura Bali reported recently that four investment agreements worth a total of USD 845.9 million were signed at the IMF-World Bank Annual Meetings held in Bali in October, one of which was the AIIB investment. 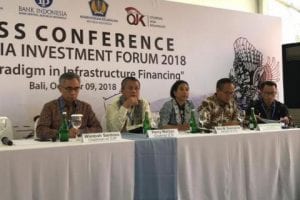 Key speakers at the Indonesia Investment Forum held in Bali in October where agreements worth hundreds of millions of US Dollars were signed to fund the construction of tourist destinations between the Indonesia Tourism Development Corporation (ITDC) and the Asian Infrastructure Investment Bank (AIIB).

According to Tempo, tourism is slated to be Indonesia’s leading foreign exchange earner by 2019/20 and Bank Indonesia (BI) are predicting the country will earn more than USD 17.5 billion from tourism in the coming year, up from USD 14 billion in 2017.

AIIB Vice President and Chief Investment Officer, D. J. Pandian said “AIIB is mandated to foster sustainable economic development in Asia by investing in infrastructure. This (Mandalika) project reflects the synergy of AIIB’s efforts and initiatives of the Government of Indonesia in promoting sustainable tourism development in the country.”

AIIB’s participation is expected to help optimize project design and implementation, which in turn would maximize economic and social cooperation and promote sustainable development.

Yee Ean Pang, AIIB’s Director General of Investment Operations, explained that “by investing in tourism-related infrastructure, we can promote balanced regional development in Indonesia and contribute to poverty reduction and women are likely to benefit from the project as tourism tends to employ a higher proportion of women.”

Andrzej Barski, Principal of Harcourts Seven Stones sees AIIB following up on its commitment as a positive sign for Indonesia’s future. “There’s no doubt Indonesia has one of the most incredibly diverse destinations in the world. It’s a truly wonderful place to visit but a lot of tourism related projects just don’t make it for whatever reason. It’s time we take some of the initiatives being floated around seriously; one of which is Arief Yahya’s (Indonesia’s Minister of Tourism) suggestion that collaboration is key.”

According to Gapura Bali, Yahya suggested tourism be combined with other industries, such as property, to make both benefits and profits more viable, at an Investment Cooperation Event held in Yogyakarta in the first quarter of 2018.

Barski believes this is the best way forward. “If tourism stakeholders and property developers collaborate for the greater good by sharing knowledge and skills sets instead of being myopic around making as much money as possible, we can all help local communities, develop educational resources, engage with technology and empower the next generation. This is a great opportunity to be investing in Indonesia’s future. If we do this right we will create conditions that foster greater economic sustainability for years to come.”

PrevPreviousIndonesia’s deficit and fiscal policy 2019: markets are confident in the country’s macroeconomic management
NextWorld Bank on Indonesia’s state of affairs: Indonesian economy could grow higher than 5%Next